3 ways the IB Diploma can positively impact admission to university

Participation in the International Baccalaureate (IB) Diploma has almost tripled in popularity since the early 2000s. At Trinity, we’ve also seen a growing number of students elect to take this challenging and rigorous education option.

Trinity IB Diploma candidates have consistently demonstrated that they are among the world’s best. In 2017, the average score equated to an ATAR of 95.85, with 33 percent of our students achieving an IB score of 40 or above (ATAR 98.30+), considered the equivalent of the Premier’s All-Rounder award and earning an IB Certificate of Distinction. The results also reveal that 79 percent of our IB students achieved an IB score of 33+ and therefore an ATAR equivalent to 90+.

Established in 1968, the IB Diploma Programme is taught to students aged 16 to 19 to provide students with a balanced education, facilitate geographic and cultural mobility and to promote international understanding. At Trinity, the IB Diploma is a credible alternative to the HSC for Year 11 and 12 students.

The IB develops students that top universities want: students with expert subject knowledge; with skills in research, essay writing, and footnoting; but above all, with the spirit of intellectual inquiry and critical thinking, the ability to challenge, argue and ask questions. So much so, the university offer and acceptance rate for IB Diploma students is notably above other qualifications globally.

Here are three ways the IB Diploma can positively impact admission to university:

1. It shows that your son challenges himself.
The top universities recognise good grades, but they also respect students that have pushed themselves to get those good grades. When the IB qualification appears on an application, admission officers automatically get an insight into a student’s character. They know that your son is self-motivated and driven.

Admission officers also know that your son had to work hard throughout the two years of the programme to get results, and that he has had to apply himself to a wide range of academic subjects, not just those that came easy to him and that he was good at. Universities understand the IB’s rigour and what it takes to come out of it with a good score: consistent hard work and dedication, the kind of qualities they look for in candidates.

2. It shows that your son has breadth of knowledge.
The IB offers a broad education by requiring students to pick subjects from a range of academic disciplines - students must study six subject areas and three core elements:

This, in turn, gives students a well-rounded liberal arts perspective, which is highly sought after in the university admission process.

3. It shows that your son is a well-rounded person.
This is no surprise considering the IB aims to create well-rounded students with all of its programmes. It does this by making sure students show achievement, not only academically, but non-academically as well. This works in favour of universities who look for things like community service, leadership, research, and impactful projects – all of which are built into the IB curriculum.

For over a century Trinity Grammar School has been helping boys from Pre-Kindergarten to Year 12 to realise their potential, passions and purpose. Deciding between the HSC and IB Diploma is an important choice. To learn more about the Trinity difference, and how the IB Diploma can positively impact your son’s admission to university and help him to grow in mind, body and spirit, download our IB Diploma brochure. 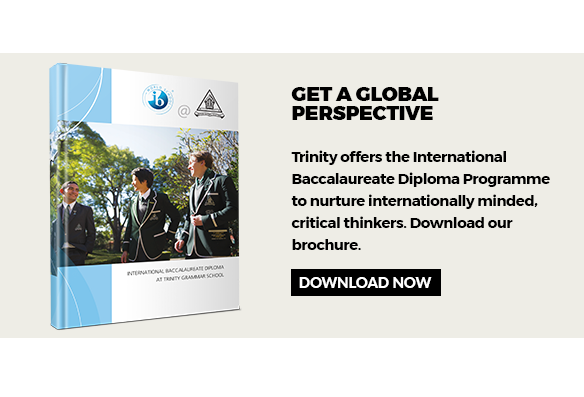