Benefits of Chess: how it improves your child’s learning

It has been regularly cited that the game of chess, invented more than 1,500 years ago in India, has educational and strategic benefits to its players. For children who start playing chess from an early age, it has been claimed to have lasting and profound effects on their cognitive development.

With advances in digital technology giving rise to an ‘age of distraction’, chess offers a unique opportunity for children to stay focused and think strategically. Chess has long been associated with valuable cognitive skills such as concentration, planning and decision-making – skills which are arguably becoming less prominent in our digital age. These skills are vital to early learners and become even more valuable during adolescence and adulthood.

We uncover some of the benefits of chess and how it can improve your child’s learning:

1. Develops patience and concentration
If a player looks away from the game for a second or loses concentration, a game could well be over as the opponent is not obliged to share their previous move. With a typical game lasting approximately 40 moves, players must remain patient if they hope to be victorious at the end of the game.

2. Improves decision-making
In many studies, decision-making and problem-solving are cited as the most obvious benefits to learning the game of chess. In a Canadian study, a mathematics curriculum used chess to teach logic to young students. The average problem-solving score increased from 62 percent to 81 percent. As children approach adolescence, an age where decision-making becomes increasingly important, chess is often considered to have a strong positive impact on developing decision-making skills as a result of the immediate consequences and rewards for decision-making under pressure.

3. Assists with strategic thinking
The prefrontal cortex, the area of the brain responsible for planning, judgment and self-control has been frequently studied as an area of the brain which is slow to develop. Whilst explaining why risk-taking behaviour is increased for teenagers, it is important that strategies are adopted to help children develop this area as much as possible. Strategy games such as chess require players to be responsible for their actions and accept any consequences whilst aiming to achieve the ultimate goal of winning the game.

4. Challenges memory and recall
Due to the visual nature of chess, it is claimed to improve memory and recall, but most evidence of this is anecdotal. However, in a two-year study in Canada, young students were given regular opportunities to play chess during their studies. It was noted that all student grades improved, with teachers noting improvements specifically in memory and organisational skills.

How to start learning chess
Learning chess can begin at home with game sets very affordable and a vast array of learning guides readily available. The game also lends itself to being played at home between parents and their children as well as during travel and holidays.

For over a hundred years Trinity Grammar School has educated boys in mind, body and spirit. Our mission is to provide a thoroughly Christian education for boys from Pre-Kindergarten to Year 12, imparting knowledge and understanding of the world we live in, and recognising the importance of spiritual qualities in every sphere of learning.

We are proud to have a long running Chess Club available to all boys. The Club currently has over 100 Senior School and more than 40 Primary School boys participating. The School is a member of the NSW Junior Chess League which entitles boys in the Chess Club to play in the NSW Secondary Schools’ Chess Competition.

At Trinity, we believe that co-curricular activities are vital in supporting your son’s academic education and allowing him to pursue his passions, realise his potential and discover his life’s purpose. If you would like to learn more about the Trinity difference and our full range of co-curricular activities, download our Co-Curricular ebook. 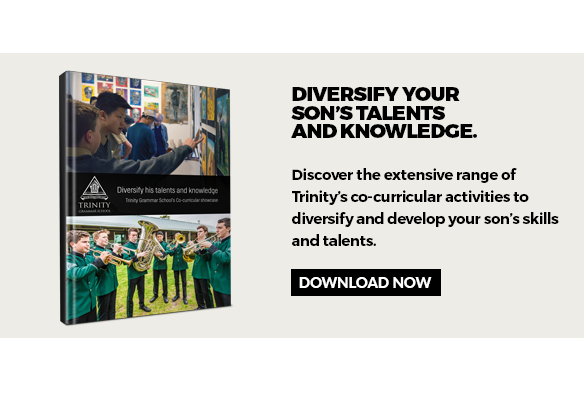