Bullying and resilience – 6 ways to build boys up

On the whole, you could be forgiven for thinking our kids have never had it so good. They’re likely to be healthier, wealthier and better educated than any generation before them. But increasingly, they report feeling anxious, stressed and depressed.

In a 2016 KidsHelpline report, the organisation reported that it received 3,828 counselling contacts (74 contacts a week, or 11 a day) in relation to bullying. And now, a new study has found that children experiencing bullying are more likely to experience some impact on their academic performance.

Education Matters magazine reported that new research by the Murdoch Children’s Research Institute (MCRI) has shown that one in three boys and one in four girls aged eight to nine years are experiencing weekly bullying at their primary school.

The key finding showed that children who were physically victimised were found to be six to nine months behind their peers on measures of academic performance.

The report’s authors state that the results are alarming and provide compelling evidence for schools and education systems to invest in the prevention of bullying and the promotion of healthy, supportive peer relationships early in school life.

Contrast this with an EducationHQ article published in the same month, which questions whether anti-bullying policies have caused the unintended consequence of creating a generation of children who lack the mental resilience required to deal with the modern world.

The article draws on the work of psychologist and author Jonathan Haidt, who compared the definition of bullying in the 1970s with how most schools would define it today. The article states, “Forty years ago, bullying was a repeated, intentional act of aggression against a child where the bully was in a position of power over their victim.”

Haidt suggests that over the years the “repeated and intentional” elements have been lost and now bullying is defined as what the victim perceives has happened to them.

While Haidt points out that this does not “diminish the appalling short and long-term effects of bullying on those subjected to it and that schools are right to tackle the abuse vigorously,” he believes the anti-bullying policies in schools has led to increased stress and anxiety in young adults.

Haidt goes on to suggests that the “'zero tolerance' approach to bullying has created a generation of adults who can’t cope with life’s setbacks, and are easily offended by even the most innocuous of things.” He concludes by suggesting that we should build the resilience of young people as well as taking a no tolerance approach to bullying.

Both articles will elicit passionate responses from parents and educators about bullying and resilience.

Helping boys to develop resilience can make a significant difference in determining their levels of confidence and ability to deal with problems and setbacks.

Here are six ways to build boys up to develop resilience:

1. Maintain strong supportive relationships
Ensure your son knows that he is not on his own, and that he is loved and supported. Surrounding your son with people that care about him will increase his confidence. By modelling behaviours such as persistence and perseverance, and picking yourself up when you suffer a setback, you will teach your son how to cope with disappointment and hardship.

2. Let your child fail occasionally
Allow your son the freedom to stand on his own feet, make mistakes and deal with setbacks, while reassuring him that you are there to support him if he needs it. Discuss the value of hardship, disappointment and failure.

4. Keep things in perspective
If your son is overcome with anger or sadness, show understanding while helping him to reframe and look at things from a different perspective. Is it really as bad as it seems? Instead of having him ask ‘why?’, ask him to think ‘how’ he can fix the situation. By nurturing pragmatism, you encourage him to look at what he can do to improve the situation. If a major incident occurs, support your son to feel his emotions by letting him know that it is OK to feel angry or sad given the situation and don’t devalue these feelings.

5. Promote problem solving
Resist the temptation to offer the solution to your son’s problems. Instead, be available to talk through an issue and work with him to problem solve for himself.

6. Teach him how to manage his feelings
The development of communication skills is closely linked to social and emotional development. The ability to talk about an emotion is different to expressing that emotion. Be open to talking about your own feelings – anger, fear, joy or disappointment ­– as they occur. Discuss strategies that you use for managing feelings and emotions, and let him know that it is OK to feel sad or angry when something bad happens.

Trinity Grammar School adopts world-leading practices to deter anti-social behaviour such as bullying, and our Counselling Department is staffed by registered psychologists should parents feel the need to discuss concerns relating to their children. We are fuelled by a pastorally aware culture that focuses on health and wellbeing. We pride ourselves on knowing, understanding and nurturing every student to help them realise their potential, passions and purpose in life.

Our mission is to provide a thoroughly Christian education for boys, imparting knowledge and understanding of the world we live in, recognising the importance of spiritual qualities in every sphere of learning. We actively encourage our students to grow in wisdom and stature and in favour with God and man, in order that they may become responsible, contributing members of society. We strive to promote the spiritual, academic, social, physical and cultural development of our boys, based on a biblical understanding of the Christian faith.

Trinity’s Life Skills Programme is part of a whole School approach to health and wellbeing. To learn more, download your copy of the Year 8 Life Skills programme booklet. 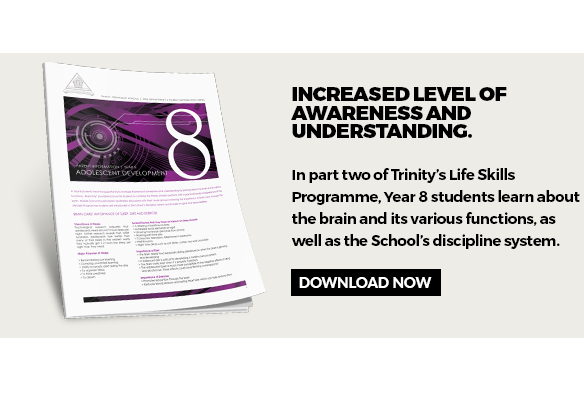