Friday Night Fever: A true taste of the Arts

The 2017 Trinity Arts Festival is an annual event that showcases performances and exhibitions in all facets of the Creative and Performing Arts, from drama, debating and music, to art, creative writing and lots more. Starting on Thursday 25 May the festival continues until Friday 9 June 2017.

Last year the event did not disappoint. The atmosphere was set the moment guests entered the School’s Quadrant where Trinity’s crest illuminated building walls in an assortment of colours as visitors walked through to Compass Court.

As the designated meeting point for the night, Compass Court was a hub of activity, with an array of student performances and artworks on show. One particular highlight was the large light installations created by boys from Years 7 and 8 to coincide with Vivid Sydney. Clowns and a magician were also on-site to entertain the masses who could be seen doubled over with laughter throughout the evening.

From Compass Court, guests had the option to visit the art exhibition which incorporated outstanding artworks from each year group. From the earliest attempts by Kindergarten students to the most sophisticated works of the HSC and IB candidates, it was a truly outstanding showcase.

A Senior student debate was held in The Latham Theatre where arguments were put forward for the best arts discipline: Music, Pictures or Words?

Music was the winner, however all boys were commended for the well-considered and balanced arguments they put forward, and the vigour with which they presented them.

Attending the debate was Director of Professional Learning and Accreditation Mr Thomas Mae who had this to say, “It was good to see the boys clearly articulate their viewpoints and values, demonstrate their listening skills and communicate with their audience so effectively. These are the skills, amongst others, that we nurture and develop in our boys at Trinity, but also ones which future employers look for when hiring new personnel”.

Visitors were provided the opportunity to check out the new TV Studio in action for the Year 11 verbatim drama entitled ‘The Wages of Spin’. The boys’ ability to embody their characters was so impressive, guests could have been forgiven for forgetting it was an amateur performance. The cast captivated the room from the moment the boys took to the stage.

Friday Night Fever would not have been complete without the encapsulating performance delivered flawlessly by the Intermediate Strings and Academy Orchestra. The School’s Assembly Hall audience waited in anticipation for the performance to begin. Once the boys began to play, a relaxed silence fell over audience members as they were enchanted by the beautiful notes resonating around them.

We anticipate that the 2017 Friday Night Fever will be every bit as exciting and captivating as last year’s event and we encourage you to come along and experience it for yourself.

Trinity has been nurturing boys to grow in mind, body and spirit for over a century. To learn more about the Trinity difference, download our Creative Arts Centenary booklet: 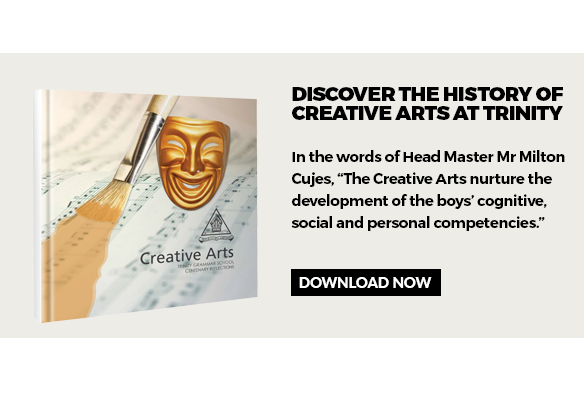