Trinity Grammar School provides boys with the opportunity to learn broadcasting and production techniques, in addition to other behind the scenes creative arts courses. For some boys, this is a great alternative to being in the spotlight. These opportunities allow them to work behind the scenes making videos or helping to stage school productions with lighting, filming and sound. Courses such as these are essential to raising well-rounded boys, building their self-confidence and further enhancing their connectedness to the School.

Fully equipped with a high-tech television studio to rival even the best universities, the School runs a group for Middle and Senior students known as Media Crew, which was established over 10 years ago. In response to the emerging trends in digital education, in 2019 the Junior School implemented a similar co-curricular choice for boys in Year 6, called Studio-T.

Media Crew is offered as a co-curricular activity with 10 to 16 students participating, as typically on a show, there are eight to ten roles or job functions to be filled. The group meets once per week after school for an hour, in addition to other times to film on location, and to provide technical support for School productions.

One of the Media Crew’s main functions is to create Green Screen Media Crew TV episodes for the School that are published to YouTube. The Crew is responsible for: deciding on direction, content, scripts, lighting and audio, filming, interviewing, news reading, editing and publishing the episodes. The episodes so far have included cooking demonstrations, coverage of Track and Field events, International Women’s Day, Arts Festival coverage and lots more.

Year 10 student Nixon Milner explains the joys and challenges: “I enjoy the experience of producing content and distributing it. To do this we use industry level equipment which is enjoyable to learn and use. Media Crew is challenging at times when the client is very specific about what they want the end product to be, but in the end, the end product is a good mix.”

The Media Crew also provides technical support to the many events that Trinity stages throughout the year. The Crew can be involved in everything from manning cameras and mixing live sound, to creating video or managing stage lighting. They also fulfil other technical roles from time to time, including stage managing and spotlight operating.

Year 10 student Andrew Cavallaro said: “Earlier this year, I was asked to be a part of the crew for the School’s Big Fish Production, where I was able to further my skills in audio mixing, taking on the role of the Front-Of-House Operator. I was able to learn how certain audio processes function and take place in a musical production. Not only did I have to control all of the lapel microphones which the cast was wearing, I also had to control the band levels, delay and reverb effects. As much as I found this task to be a challenge, it was also one of my most favourite experiences I have ever had at Trinity. The satisfaction and sense of achievement I felt after mixing the three night-time performances and matinee show was like no other.”

Studio-T is a co-curricular activity offered to Year 6 boys at the Junior School. The club also uses the high-tech Senior School TV studio to create a morning breakfast themed show, TriniTV which is broadcast on the screens around the School.

“We’re having great fun scripting, reporting, filming, editing and producing the show. So far, we have interviewed teachers, looked at sporting events, reported on the weather, and much more including a special guest appearance,” said Year 6 student, Theo Murphy.

“It’s been a really great experience learning about what happens on and behind the cameras and all the roles and tasks required to make what would appear to be an easy TV show,” added classmate Lachlan Yap.

Trinity boasts an unparalleled Creative Arts Programme, enabling your son to enjoy a rich array of courses, with first-class facilities for ceramics, sculpture, dance, drama, music, and more. Whether centre stage or behind the scenes every boy can enjoy the benefits of creative arts at Trinity.

From the outset, Trinity Grammar School has provided a rich cultural environment enabling boys to recite their stories and express the intangibles of life. Recognising the strong links between creative arts and academic performance, Trinity offers a comprehensive Creative Arts Programme to students from Pre-Kindergarten to Year 12. Trinity’s Society of the Arts has been providing opportunities for boys to be exposed to fine Art and Music with which they would not normally come in to contact. This rich history has been the foundation for a breadth of performing and exhibition arts being taught, encouraged and fostered by some of the most passionate and expert educators in the country.

To find out why we are one of Sydney’s leading schools for boys and to learn more about the Trinity difference and the creative arts at Trinity, download our Creative Arts booklet. 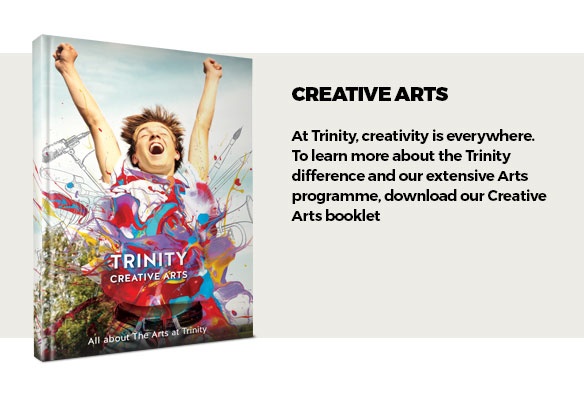