Is the study of music the key to professional success?

“There’s nothing like music to teach you that eventually if you work hard enough, it does get better. You see the results.” The words of Chuck Todd, the Chief White House correspondent for the American television network NBC, succinctly captured the sentiment behind a growing theory that the study of music can create success in other aspects of life.

At Trinity Grammar School, the Music Department aims to develop activities that encourage students to work directly with the raw materials of music so that they can best discover something of its nature, vitality and the range of its expressive qualities. Philip Pratt, Director of Music, expands on this idea.

“A student’s engagement with music at Trinity Grammar School is based on the ‘real life’ music activities of listening, composing and performing. To achieve this, we use an experiential learning model of teaching where boys are encouraged by their teachers to reflect upon and appraise their own work and the work of others, in order to develop a relationship between themselves and the music,” said Philip.

The notion that the study of music stimulates success in other areas of life is supported by a growing body of research. An article by Joanne Lipman in the New York Times (Is music the key to success?) highlights the link between the study of music and professional success in a non-music field.

In her interviews with several ‘top-flight professionals’ working in media, technology, politics, finance and business, Ms Lipman noted that many of her interviewees credited their success in part to their study of and involvement in music. Her article referred to many people who can be considered to have achieved “outsized success in their fields”, including Condoleezza Rice, former US Secretary of State, who trained as a concert pianist, and professional clarinet and saxophone player Alan Greenspan, former chairman of the US Federal Reserve.

Ms Lipman reported that many ‘high achievers’ informed her that music opened up the pathways to creative thinking. Their experiences suggest that music training sharpens other qualities, such as collaboration; the ability to listen; a way of thinking that weaves together disparate ideas, and the power to focus on the present and the future simultaneously.”

This resonates with Philip Pratt, who adds that some of the important ‘life skills’ a student can learn from their interactions with music, whether working independently or co-operatively, include the development of:

“At Trinity, in both performance and composition, boys are encouraged to try out new approaches, to explore uncertainties and to make sense of their exploration. Engagement with music at any level encourages students to make new connections between different ideas, learning to express them in a new way. In turn, students then apply these skills in other areas, not only at school but also – and perhaps more importantly – in other parts of their lives,” said Philip.

At Trinity Grammar School, we strive to instil in boys these skills that will stay with them during their time at the school and will benefit them later in life when their studies, passions and careers take them in many different directions.

To learn more about The Arts programme at Trinity Grammar School and to read the Arts Festival schedule, click here to download the brochure. 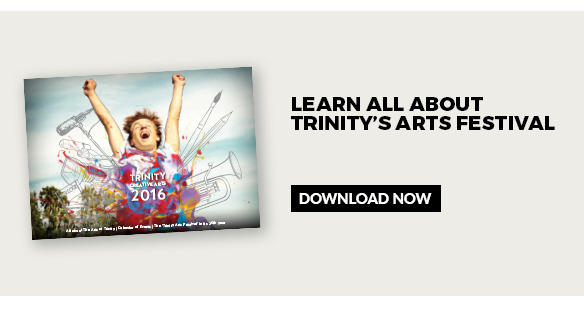