Theresa Ardler never imagined that her work with Sydney’s Trinity Grammar School would lead to an emotional reconnection with her family’s past and a return of treasure beyond measure with rich historical significance.

Ms Ardler is a Gweagal Aboriginal woman of the Eora region (her mother’s country), who grew up and now lives in her father’s country the Yuin nation, situated in the beautiful Booderee National Park, Jervis Bay. With a Bachelor of Education, Diploma in Child Science (TAFE), and current studies for a Master of Religious Education and a Master of Educational Leadership, Theresa’s vision is to work towards educating school communities, teachers and students about the richness of Aboriginal culture and Spirituality within Australian society.

Teaching boys from Trinity Grammar School in Sydney at the School’s Field Studies Centre in Woollamia near Huskisson in the NSW Shoalhaven region, allows Ms Ardler to share her Indigenous culture, knowledge and artistry. “I look for opportunities to work creatively and innovatively in cultural and school environments that can produce genuine and meaningful cultural dialogue,” commented Theresa.

But it was a trip to Trinity’s Summer Hill campus in Sydney that sparked a serendipitous reunion. In Sydney to help the School write a comprehensive unit on Aboriginal Art, Therese got speaking to Trinity Visual Arts Head of Department, Stephen Collins when they realised that their recent ancestors came from the same region in the Goulburn area of the Gundangara people.

Stephen’s family had owned a property in the area from the 1920s to the early 2000s and while ploughing a paddock near an outcrop of large rocks which contained a small cave, Stephen’s father unearthed what was mostly smaller rocks. To his surprise he discovered that some of these were in fact rocks sharpened into tools that were most likely used by Gandangara Aboriginal people.

Stephen has been the custodian of the treasures that his father had unearthed years ago. “I’ve had them for quite some time and have been trying to figure out what to do with them. I wasn’t sure whether to give them to a museum, or the School’s Archaeology Society for our students to enjoy, but neither of these options seemed right. Clearly the universe had a plan and as I got talking to Theresa and learned that the tools came from her ancestors’ land, it was an obvious solution – I’d found the rightful owners and returning them was the right thing to do, considering Theresa’s ancestors likely made and used them,” said Stephen.

Theresa quickly identified that the artefacts were two scraping tools that fit neatly into the hand, and a large axe head similar to a tomahawk. “The tools are in very good condition and still very sharp,” remarked Theresa.

A small ceremony was held in front of a class of Year 8 boys that Theresa had been teaching about Aboriginal Tools and Technology. Theresa made the Year 8 students aware that they were witnessing a once-in-a-lifetime opportunity. “This is a very special occasion and you will probably never see this happen again,” she said.

Clearly moved by the gesture, Theresa wiped away tears as she continued: “This is a very emotional thing for me. To know my ancestors’ tools have been returned to my family means a lot to me – it’s like having a piece of my great grandfather back with the family.”

Steve plans to visit the area where the tools were found to collect some local soil which he will give to Theresa. Theresa’s family members will each be invited to touch the tools to connect with their ancestral past before they are placed in the soil from their original location. The family will then discuss with clan members and elders where and how the artefacts should be located and stored long-term.

“I’m just so happy that these treasures have found their rightful home,” concluded Stephen.

Trinity’s Field Studies Centre is located at the nexus of the Aboriginal Dharawal and Dhurga country in Woollamia in the Jervis Bay region of NSW. The local Aboriginal community regularly shares its local knowledge and culture with students staying at the Centre. The Field Studies Centre provides an ideal setting for Trinity boys to be nurtured and challenged, enabling them to develop soft skills (emotional, social, psychological, communication, empathy, self-concept) and hard skills (technical, safety, environmental), and encouraging growth in mind, body and spirit. 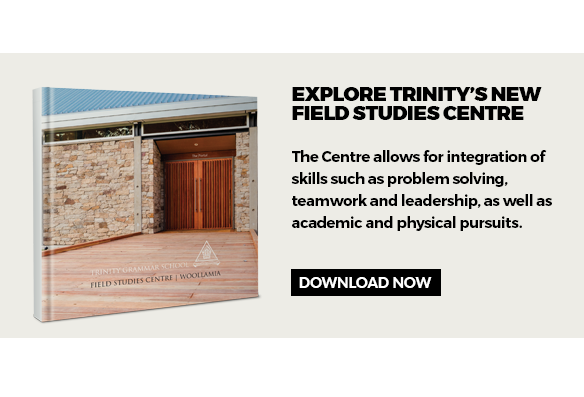