Trinity highlights of 2016 captured on film

2016 has been a great year for Trinity Grammar School with incredible sporting and academic achievements, excellence in Music and the Arts, not to mention the opening of two new state-of-the-art facilities. While there were many exciting events, and we’ve mentioned only a few here, you can see our Trinity highlights of 2016 captured on film below.

It has been a big year in terms of new facilities. 2016 got off to a flying start with the official opening and dedication of the Centenary Centre in January. The Centre features a state-of-the-art pool and has been put to the test this year, housing Swimming, Water Polo, Volleyball, Basketball, seminars and examinations.

More recently, our new dedicated Trinity Field Studies Centre in the Shoalhaven was officially opened and dedicated in November. We’ve had excellent feedback from students, parents and the local community about the superb facilities and picturesque natural environment, which helps the boys learn about their responsibilities as custodians of it.

In sporting terms we’ve had one of our best years on record. In two awesome meets and with results in the balance, Trinity managed to pull in front winning both the CAS Swimming and CAS Track and Field Championships. Trinity enjoyed other notable wins in Basketball, Volleyball, Cross Country, Diving and AFL.

The Creative Arts had a bumper year with many fine performances and exhibitions from Kindergarten to Year 12. The 10 day Creative Arts Festival in held in June, celebrated its 20th year. Well attended and enjoyed by thousands of people including families, friends and the general community, the festival featured music, art, drama, film, debating, creative writing and a spectacular light show as part of Friday Night Fever. A Primary Years Programme version of the festival was held in August highlighting the outstanding developmental growth of our Preparatory and Junior School boys.

This year’s Primary Years Programme (PYP) was a huge success with Year 6 boys from the Junior and Preparatory Schools staging a highly entertaining and informative Exhibitions, which tackled a vast array of difficult issues concerning health, culture and the environment.

In a sombre occasion we mourned the passing of Roderick West AM, Head Master of Trinity from 1975 to 1996, in a moving ceremony in the School Chapel. We also marked Remembrance Day, a poignant and significant event in the School calendar, with our Cadets coming to the fore to perform a well-executed Catafalque – a ceremonial drill movement.

And to wrap up the year, students, teachers and friends let their hair down for a day of food, fun and frivolity at the annual Trinity Fiesta in November. The Fiesta allows Trinity to open its doors to the community and features live performances, market stalls, countless food stalls, high tea, rides and a silent auction where the merchandise on show rivals department stores!

We’re looking forward to finding out what 2017 has in store for us.

For over a century, Trinity Grammar School has guided boys to grow in mind, body and spirit and we inspire boys to realise their potential, passions and purpose in life. Our students experience a variety of opportunities in Sport, the Arts, Cadets, Field Studies and more. To learn more about the Trinity difference and to see what we can offer your son, download our Trinity in Action videos. 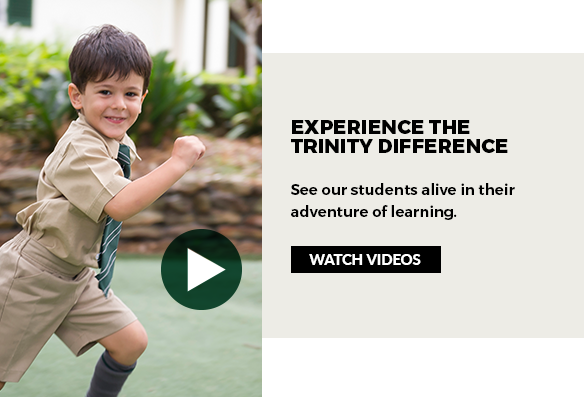