In recent Trinity news, 2017 graduate Brian Kim, of Baulkham Hills is the first ever Australian flautist to be accepted for under graduate study at a prestigious music school in Paris, and will be taught by Professor Phillipe Bernold, one of the world’s top flute teachers.

Still on a high from achieving 44/45 (an ATAR equivalent of 99.85) in the International Baccalaureate (IB) Diploma last year, Brian did not rest on his laurels, practising vigorously ahead of auditions for tertiary study overseas. The effort paid off with Brian being offered a position at Conservatoire National Supérieur de Musique et de Danse de Paris, to study flute. Alumni of the Conservatoire include renowned French composers Claude Debussy, Georges Bizet, Maurice Ravel and Camille Saint-Saëns.

From the hundreds of tapes and applications, 120 flautists aged under 21 were selected from all around the world for live auditions in Paris over a nine-day period. The first four days saw the number applicants reduced to 18 and from there, just four were offered places at the Conservatoire, with Brian’s selection being unanimously decided by the different judging panels.

“The audition experience was very intense and competitive. The first round required us to play two set pieces which we received five weeks before the audition date, so there was limited time to prepare. After the first round, 18 of the 120 were chosen to compete in the second round.

The second round comprised a set piece which was originally written for the school graduation competition decades ago, and a sight-reading exercise. I had five weeks to prepare for the set piece, but only three minutes to prepare for the three-page piece for the sight-reading exercise before performing it for the first time. I was shocked and scared by the unbelievably outstanding standard of performance.”

Brian intends to move to Paris on his own in August and plans to live in the school’s dormitory for the four-year duration of the course: “It will be very hard as I will be leaving my family, friends, my home country, in fact my whole life in Australia to live and study in a foreign country. The course will be run in French, and while I am quite confident in my French – I studied it at Trinity for five years – language in class and out in the real world is very different, as I experienced during my recent three weeks in Paris. I hope to adapt quickly and improve as that will help me to settle in,” said Brian.

Asked how he felt when he realised he’d achieved his dream, Brian says, “I was in disbelief when my name was read out in the room. The school carries a tradition where all candidates are called back into the school a few days after the audition, and the results are announced in front of everyone. When I heard my name, I questioned my ears and even questioned if I was understanding French correctly! After a few moments, when other candidates were congratulating me, I came to my senses and was overcome with joy, pride and excitement! I am still feeling all those things!”

Brian says he will get emotional support from his family and friends back in Australia, and although he will miss his family, girlfriend and friends most – not to mention the warm weather, beaches, and “everything Australian,” – he is looking forward to studying with Professor Phillipe Bernold and being able to play music with the best students in the world.

“In the end, I am proud to have represented Australia and our music, and to be the first Australian to be accepted by Europe’s best school for flute,” concluded Brian.

The Conservatoire National Supérieur de Musique et de Danse de Paris is not the only Paris-based school at which Trinity will be represented. Fellow 2017 graduate, Luc Velez has been accepted at the Ecole de la Chambre Syndicale de la Couture Parisienne, an institute ranked in the top six fashion schools in the world. It is a stunning achievement for Luc, who is vigorously learning French in Paris ahead of commencing his course in September this year.

Recognising the strong links between music and academic performance, Trinity offers a comprehensive music programme to students from Pre-Kindergarten to Year 12. With music being an essential element of Trinity’s curriculum, most boys at some stage, will learn a musical instrument and engage in group musical activity; such as choir, orchestra, band or ensemble, or a musical stage production. We take creative and performing arts seriously.

To find out why we are one of Sydney’s leading schools for boys and to learn more about the Trinity difference and our exceptional music programme, download our Music ebook. 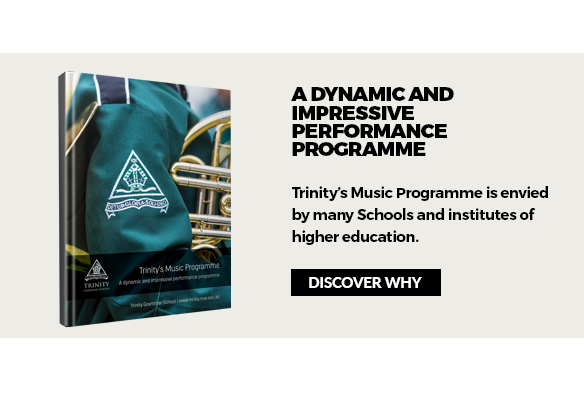