Why commemorating our Anzacs is important in education

Dawn on 25 April marks the time when Australian and New Zealand forces landed north of Gaba Tepe on the Gallipoli Peninsula. They met fierce resistance from the Ottoman Turkish defenders, along with the odd German advisor. News of the landing at Anzac Cove had made a profound impact on Australians at home, and 25 April soon became known as the day it is today - a day when Australians remember the sacrifice of those who had died in war.

The story of Anzacs is one that all students know well. What had been planned as a bold stroke to knock Turkey out of the war quickly became a stalemate, and the campaign dragged on for a further eight months. At the end of 1915 the allied forces were evacuated, after both sides had suffered heavy casualties and endured great hardships (over 8,000 Australian soldiers had been killed).

Yet, after Gallipoli, some 54,000 other Australians gave up their lives from late 1915 until the end of World War I. The majority of these men died on the battlefields of the Western Front, across Northern France and Belgium. This 54,000 is a significant figure, in that it accounts for over half Australia’s total war dead from the 1860 Maori Wars up to the present day conflicts in Afghanistan and Iraq.

It is this sacrifice on the Western Front that has a habit of reaching into the present consciousness of students, with media coverage of the discovery and internment of the remains of soldiers, through the ploughing of long forgotten battlefields by modern French and Belgium farmers.

As the historian Les Carlyon outlines; “For three years Australians, youths of 16 and 17 as well as balding 45 year olds, tramped up and down the Somme downland and Flanders plain, past wayside shrines and clusters of brick barns, sometimes marching 30 kilometres a day, going up to war and coming out again, taking in reinforcements and going back to war again. So much of Australia’s potential future was buried along that line over a period of three years. Under the chalk of the Somme and the clay of Flanders. How many young men who might have been Prime Ministers, novelists, scientists, cricketers, footy players, husbands and fathers are buried there?” When students look at the images of these men and boys they recognise in them their own brothers, friends and family and truly understand the significance of their sacrifice that we honour on Anzac Day.

A young nation with a population of under 5 million at the outbreak of war in 1914 sent 324,000 volunteers overseas to fight. Most of the 61,000 who died and the 155,000 who were wounded in World War I fell along the line that stretched northward from the Somme to Passchendaele. A line of not much more than 100km. But those who died on the Western Front represent over half of those who died in conflicts over 150 years.

The sacrifice in WWI has come to symbolise all those who have given their lives in service for their country. It is for those men and women, whose names stretch along the Roll of Honour at the Australian War Memorial in Canberra, and whose names students see etched into countless memorials in suburbs, towns, cities, churches and schools throughout the country, that we commemorate Anzac Day.

Commemorating our Anzacs is important in education. To learn more about how Trinity contributed to the war efforts, download our Trinity Remembers: They also served book. 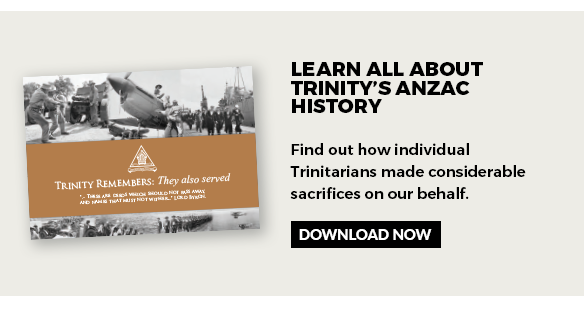